The Georg Heeg eK Company was founded in 1987 and works exclusively with Smalltalk by providing consulting, training, development, pre-sales and post-sales support and Cincom Smalltalk™ product support. Georg Heeg eK was the first Smalltalk-80 distributor in Europe and they’ve been a dedicated Smalltalk shop throughout the years. Smalltalk has gone through a series of ups and downs, mergers, acquisitions and name changes. Cincom acquired ObjectStudio in 1996 and then VisualWorks in 1999, forming the Cincom Smalltalk Suite of products. It wasn’t until Cincom brought these products together that Smalltalk has seen so much growth and future growth potential.

It’s partners like the Heeg organization and their dedication to Smalltalk and Cincom that has added to this growth for Cincom, Cincom Smalltalk and of course, Heeg. Georg Heeg eK officially became a partner with Cincom in 2000 shortly after Cincom acquired VisualWorks. Over the past 13 years, Heeg has built a strong and valuable relationship with Cincom by being a trusted partner through development, consulting, support and most recently, as a Value Added Reseller.

Beyond this, the Heeg organization has worked on several engineering projects alongside our Cincom Smalltalk group, most notably COM Connect, DotNetConnect, SAP NetWeaver Connect and MQ-Interface. These developments were not only instrumental in keeping existing contracts with current customers, but provided additional value to our product offerings for future clients and added revenue. The Heeg organization has also developed 45 contributions which ship with each copy of Cincom Smalltalk. Some of these contributions are Tool enhancements and others are former Heeg contributions that have been offered to Cincom Smalltalk users. 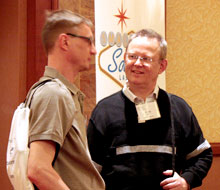 Georg Heeg eK is widely known throughout the world. The founder and owner, Georg Heeg, travels the world as a speaker and advocate of Smalltalk and has an excellent business reputation and a passion for Smalltalk and mostly, Cincom Smalltalk. Over the past five years, he has represented Smalltalk as the President of the Smalltalk Industry Council and has led the Council in several successful conferences. He also helped establish the Academic Advisory Council, which is designed to promote Smalltalk education and community growth by creating year-round programs that will enrich the community, build interest for Smalltalk and grow the Smalltalk community with new Smalltalkers. Georg’s passion for Smalltalk, excellent business sense and the desire to see continued growth for Cincom Smalltalk and our valued relationships will only lead to future growth for Cincom and Cincom Smalltalk. Heeg’s acquisition of CS Components’ assets has led to several new named revenue accounts for Cincom, with more in the pipeline.

It’s difficult to calculate the revenue brought in by the Heeg organization because they have primarily been a services partner. Not only do they provide excellent support and services to our client base, but they bring in referrals to us for license revenue. Heeg promotes Cincom Smalltalk as the Smalltalk of choice. Anyone who knows anything about Smalltalk knows about the Heeg organization. The fact that they have aligned so closely with Cincom has had a huge impact on the growth and profitability of Cincom Smalltalk and future opportunities.

Cincom has benefited from our partnership with Georg Heeg eK in many ways. Not only has this relationship been one that has created revenue-generating projects over the years, but it has also helped to cast a positive light on Cincom throughout the Smalltalk community and potential users world-wide. The Heeg organization has also crossed over into other product groups outside of Smalltalk. They were recently involved in a project with the Synchrony group to better align Synchrony with various partners.

When the opportunity arose to create an interactive, museum-quality exhibit at the iconic K then Castle showcasing the extensive history of the German language, Georg Heeg and his team jumped at the chance. The only catch? It had to open in 3 1/2 weeks.

Georg Heeg, a consultant who works on Smalltalk projects throughout central Europe, tells a story about a unique and interesting use of Cincom VisualWorks integrated with Seaside and GemStone – two Smalltalk technologies that work well with VisualWorks. The goal of the project was to determine the house in which composer Johann Sebastian Bach had lived during his time in C then, Germany.