For more than 25 years, German firm, Georg Heeg eK, has developed software solutions for worldwide companies spanning all industries. As a premiere partner for Cincom, the company provides consulting, project management, training and support services for all things Smalltalk. 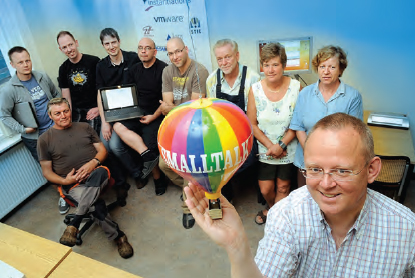 When the opportunity arose to create an interactive, museum-quality exhibit at the iconic Köthen Castle showcasing the extensive history of the German language, Georg Heeg and his team jumped at the chance.

People said it couldn’t be done in such a short time frame. Local news reports and others called it “crazy” to even try. However, thanks to the dedicated staff of Georg Heeg eK and the capabilities of Cincom® VisualWorks®, the exhibition was ready on time and opened to rave reviews!

In putting together this exhibition, there were several significant accomplishments that were brought about due to the capabilities of Smalltalk.

Other applications access the web or are local Smalltalk apps using a local image of seaBreeze, which is a fully integrated Smalltalk web application server with an HTML editor inside the web browser. The most interesting app communicates with the internet, takes the information it gets from various places and compiles a new web page with the selected and collected information so that there is a common look and feel for all content.

Cincom Smalltalk’s ability to create innovative, intuitive, modern-looking user interfaces was used to visualize historical data in the showcase archives and libraries.  The ease, flexibility and productivity of Cincom Smalltalk made this exhibition possible within the ‘insanely’ short time frame.
Georg Heeg

Since the time this Partner Spotlight was originally written, we’re happy to say that not only was the project a huge success, it also has recently gone through a significant expansion.  Just like the original project, Cincom and Georg Heeg eK are expansion co-sponsors, and all of the programming was done using Cincom Smalltalk.

The expansion includes two new exhibits: The “Guess What XYZ Means in ABC Dialect” game and a sound station with 70 buttons, 70 LEDs and a few hundred sound files. Thanks to the hard work and expertise of Georg Heeg eK and Cincom, everything works as designed!